“Grant me a son, the equal of whom has not been born, nor shall be born.” was what Pandit Vrajnath prayed for.

The British conquest of Bharat was not just political, it operated at another level too.  Many ordinary Bharatiyas were led to believe that only by adopting Western mores and habits, one could progress in life. A new breed of Englishmen were being created, who were Bharatiya outside, but British inside, the children of Macaulay, so named after Thomas Macaulay,  the British Secretary of War. He introduced English education into Bharat, and had downgraded the importance of Sanskrit language.

1861 was significant, the Great Bharatiya revolt was crushed 4 years back and English education was spreading at a rapid rate in Bharat. On the other side of the world, in the United States of America, a bitter Civil War had broken out on the issue of slavery. Near the city of Allahabad, on a date when one half of the world, was celebrating the arrival of Jesus Christ, was born the son, whom Vrajanath, had fervently wished for.  And the boy was named as Madan Mohan. Who in due course of time, would become one of the tallest stalwarts in modern Bharatiya history. The son whom Vrajanath always hoped for would exceed even his father’s expectations.

Madan Mohan began his education at a Sanskrit Pathasala, called Dharmagnanopadesa, run by Pandit Haradeva. It is said that Haradeva was impressed by Madan Mohan’s recital and skills. He learnt the Laghu Kaumudi in Sanskrit, and many verses from the Bhagavad Gita. The Gayatri Mantra was taught to him during his thread ceremony. While a good student, Madan Mohan was also an equally mischievous child, loved to play games and used to exercise regularly.

Like most others, Madan Mohan wanted to study in an English school, however his family’s rather modest financial background was an impediment. It was then that his mother Moona Devi, pledged her gold bangles to raise money.  Madan Mohan got admitted into the Allahabad District School where he managed to master English. Inspite of the financial difficulties, his parents ensured, he would never suffer from lack of learning.

Apart from his studies, Madan Mohan was also good at music, learnt to play the flute and sitar too. He also learnt the songs of Meera and Surdas too.

He passed the FA examination from Muir College (now Allahabad University)  in 1881, and later in 1884, he passed the BA examination from Kolkata University. Madan Mohan wanted to study MA in Sanskrit, however knowing his parent’s financial condition, he decided to take up a job to assist them. And so he took up a job as an assistant master at the Government High School in Allahabad.

His political career began in 1880, when he attended the 2nd session of the Indian National Congress under Dadabai Naoroji at Kolkata.  He impressed every one there, with his short speech. Being a good orator himself, Madan had a natural fluency in his words,  and he received a huge applause.  A.O. Hume, the founder of the Indian National Congress, called Malaviya’s speech as unforgettable.

Raja Rampal Singh, the ruler of Kalakankar estate near Allahabad, was so impressed by Malaviya, that he offered him the role of an editor for the magazine Hindustan, owned by him. Malaviya, worked for 2 years with Hindustan,  and he later did his LLB from Allahabad. In 1892, Malaviya became an advocate at the Allahabad High Court. In due course of time, Malaviya impressed every one with his arguments, analysis and wisdom.

Vrajanath’s prayers had come true, his son’s name was indeed spreading all over. Malaviya never used his knowledge in the wrong way, he fought for justice, for the poor and innocent people. He would never take up a wrong case just for money.

In the meantime, Malaviya was also involved with the freedom struggle, and was twice President of Indian National Congress in 1909 and 1918. A devout follower of Mahatma Gandhi, the latter conferred the title of Mahamana on him. Plunging into the nationalist movement, he renounced his law practice.  However, when 177 freedom fighters were to be hanged in the Chauri Chaura case, he was the one who took up their case, and got them acquitted. While a devout follower of Mahatma Gandhi, he was nevertheless against participation in the Khilafat movement.

In 1928, he took active part along with Lala Lajpat Rai in the protests against the Simon Commission, and also actively boycotted British made goods. He was arrested in 1932, during the Civil Disobedience Movement, and once again served as President of INC during 1932-33.

He, however, left the Congress due to the Communal Award that sought to provide separate electorates to the minorities.

The greatest achievement of Malaviya, however, would be setting up of the Benares Hindu University.  It was a time, when the feeling among most Bharatiyas was that only Western education could provide them a better life, and Bharatiya culture was useless. Malaviya wanted to create an institution which could inculcate respect for Bharatiya culture, while at the same time, ensuring the students received  a modern education to.

It was not an easy task, starting an University needed funds, and Malaviya took this up single handedly. When he first made this proposal at the Congress session in Benares, it was heartily welcomed. Surendranath Banerjee, proclaimed he was willing to work for free in such an institution. The land for the Benares Hindu University, was given to him by the Raja, after much persuasion.

And now began the tougher task of raising funds for the University. 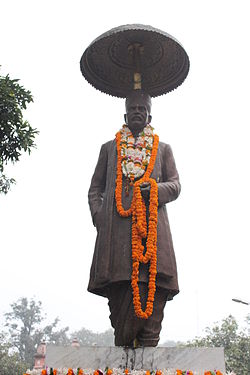 Malaviya began to tour the length and breadth of Bharat,  and people began to contribute for the cause. When he reached the Nizam of Hyderabad, the world’s richest individual,  the latter was reluctant to donate for what he deemed a Hindu university. Malaviya, however, had no intentions of returning empty handed, and so he went around the streets of Hyderabad, asking for money for the cause. When ordinary people of Hyderabad, began to donate, the Nizam ashamed of his conduct,  donated generously.

From Kashmir to Kanyakumari, from Peshawar to Kolkata, Malaviya went about raising funds for the cause. The Maharaja of Darbangha in Bihar, was spell bound by his Bhagavad recital during his tours. He not only donated 25 lakh rupees for the cause, but also pledged to work for it during his lifetime.  The Maharaja, himself raised funds for Malaviya’s project, visiting other kings and rulers.  Malaviya collected a crore and 34 lakh rupees, earning him the title of Prince of Beggars, Gandhiji claimed, he often learnt about begging from Malaviya.

Feb 4th, 1916, the auspicious occasion of Basant Panchami, on the banks of the holy Ganga, the foundation was laid for Benares Hindu University. A great occasion like never before, history was being made.  Lord Hardinge, the Governor General of Bharat, laid the foundation, the function was attended by Rajas, Maharajas,  Hindus, Muslims, Christians, just about every one.

Malaviya believed that Hindus should be made aware of their culture, and study of Gita, the Mahabharat, Ramayan, Vedas and Upanishads was much needed. It was what drove him to establish the university.

Let our youths receive liberal education. Side by side let them also try to learn how to evaluate the teachings of other religions.

This was the ethos behind the foundation of Benares Hindu University, which would later become one of the finest educational institutions of Bharat. Malaviya believed that young men should protect the Hindu dharma, which constituted Bharat’s very soul. He wished that people should understand religion in it’s true sense, a code of conduct that would drive them, not just some meaningless rituals.

The millions mired in poverty here can only get rid (of it) when science is used in their interest. Such maximum application of science is only possible when scientific knowledge is available to Indians in their own country.

Malaviya also got support from Annie Beasant for his dream project,  who was also seeking to expand her Hindu Central School.  The ruler of Kashi, Naresh Narayan Singh and the Darbhanga ruler Rameshwar Singh Bahadur also supported him financially. Benares Hindu University was the first in Bharat, to be established due to an individual’s private efforts.

As a journalist too, Malaviya, contributed selflessly to the cause of the media. Apart from his stint at Hindustan as an editor,  he also guided smaller newspapers like Gopala and Abhyudaya, edited by P.D.Tandon.

He campaigned against the Press Act in 1908, and along with Motilal Nehru, he started an English daily the Leader. In 1924, he acquired the then ailing Hindustan Times along with Lala Lajpat Rai, and G.D.Birla, and for 2 years as Chairman, turned it around financially, and in 1936 he also launched it’s Hindi edition, Hindustan.

If you admit internal purity of human soul, you or your religion can never get impure or defiled in any way by touch or association with any man.

Malaviya was also strongly against untouchability, and founded the Harijan Sevak Sangh in 1933, for the Dalits. He worked for eradication of caste barriers, and took an active part in the entry of Dalits into temple. He was one of the main persons behind the entry of Dalits in Nashik’s famous Kala Ram’s temple.

A linguist, Malaviya was fluent and a scholar in English, Hindi and Urdu apart from Sanskrit.

When Hindus were massacred at Noakhali, prior to independence, and forcibly reconverted into Islam, he took in those who fled. He reconverted many of the Hindus who were forcibly converted to Islam.  He also started the Ganga Arati at Haridwar, and there is a small island there named after him. He proposed the adoption of Satyameva Jayate taken from the Mundakopanishad as Bharat’s national motto. Another achievement was the founding of All India Seva Samiti, a scouting organization to inculcate the spirit of social service.

On 12th November 1946, Madan Mohan Malaviya passed away, but his legacy would forever remain in the form of the Benares Hindu University, one of the finest educational institutions in Bharat. When we witness the beauty of the Ganga Arti at Haridwar, we see the legacy of Mahamana there.

Vrajnath had prayed for a great son, he did not just have a great son but his son also left behind a great legacy. Naman to the great son of Bharat on his Punya Tithi (death anniversary).

(This article was first published on author’s blog)

Minor girl from UP who was raped by her cousin, Abdul, dies in Safdarjung hospital

Former BJP MP Mahavir Bhagora who died of COVID, had represented a reserved ST constituency and was given a Christian burial