May 16th, 2014 is probably the day the leftists hate the most. That was the day 2014 elections results were announced and it was the day Bharat knew who her next PM was going to be. Seculars have been manufacturing issues to defame Modi ever since. They didn’t even mind defaming Bharat in order to achieve their objective.

However, the so-called ‘communal’ BJP supporters (or bhakts as they are often derisively referred to), on the other hand, waited for 2 ½ years before they started whining about Modi’s inability to be more aggressive. Some bhakts even went on to say they wasted their vote by voting for Modi, as though they had a better alternative.

In the times when Bharatiya & international media, all the secular parties, judiciary and powerful NGOs are launching a coordinated attack on anything Hindu, people appear mighty frustrated at Modi. They are complaining rather than supporting him.

More than ever before, it’s important for bhakts and also Modi himself to realize the importance of his presence as the PM of this country. Nothing explains the importance of one man standing between an opponent & his victory like a situation in Yuddha Kanda of Valmiki Ramayana.

With Angada sent as an emissary, Rama’s talks with Ravana fail and consequently a war breaks out. As a result, the Vanaras fight Ravana’s army vigorously. With Hanumana, Angada & others slaining all the prominent ones, Ravana himself enters the battle only to be overcome & let go by Rama. Following Ravana, Kumbhakarna encounters Rama & gets slain subsequently. Then enters Indrajit.

Indrajit, due to virtue of a boon he received from Brahma, has the ability to make himself invisible. So, he showers the opposite camp with his arrows while remaining invisible. To put it in today’s perspective, Indrajit is like Sonia Gandhi in this battle against Break India Forces (BIF). Invisible to everyone, she keeps attacking her opponents, without getting caught, behind the facade of UPA.

As a result, the foremost of the Vanaras covered by the shower of arrows fall insensible. Just like how our education syllabus & institutions, CBI, judiciary etc. fell insensible for astrAs like Right To Education Act (RTE), 93rd amendment paralysing Hindu & private schools, giving a clean chit to terrorists like Ishrat Jahan etc. fired by UPA.

With the foremost Vanaras fallen, the remaining ones could see nothing except the shower of sharp arrows decimating their camp exactly like how media & judiciary couldn’t see Sonia of UPA camp as she kept firing one scam after the other at the nation.

Forget not how this invisible Indrajit of Bharat’s politics even went on to frame people like Sadhvi Pragya, just so they could manufacture a non-existent phenomenon – Saffron Terror. They gave a color to terrorism to balance Islamic terrorism even at the cost of compromising national security. UPA opened the gates of Bharat to Christian Missionaries by introducing Missionary Visas. Before 2014 elections, Congress party even tried to pass the rabidly anti-Hindu Communal Violence Bill. Fortunately, it was deferred due to some reasons – states opposing this bill, due to encroachment of state’s jurisdiction (law & order) by the central govt being one of those reasons.

Now, coming back to Yuddha kAnda, Rama amidst all that, having thoroughly noted what happened, told Lakshmana to allow Indrajit to shower his arrows on them so that they can fall unconscious. Having perceived Rama & Lakshmana unconscious, Indrajit will go back to Lanka without any future havoc. So, Rama & Lakshmana stick to their plan and offer no resistance to Indrajit exactly like how BJP offered very less resistance when it comes to RTE or 93rd amendment or in general. The only difference being, Rama did that as a well thought out plan & BJP did due to lack of it. 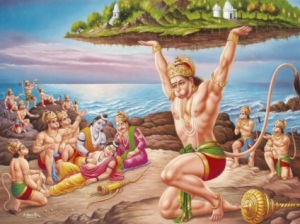 It’s in this situation where BJP fell unconscious, beaten at the game by UPA and with no resistance to offer, they needed a Hanumana who could bring herbs like Vishalyakarani, Suvarnakarani etc. that help heal the wounds and invigorate their army for 2014 elections.

How important is he in today’s context where every institution is dominated by the leftists?

Vibhishana & Hanumana, who survive Indrajit’s attack, start looking for all the remaining prominent warriors. They behold all of them, except Jambavan. They both go in search of Jambavan, but Vibhishana finds Jambavan first.

Is Hanumana, the foremost among monkeys, because of whom, Anjana and the wind-god are his blessed parents, alive?

Why do you enquire about Hanumana, passing over the venerable sons of Dasaratha? The exceptional affection, you are showing towards Hanumana, is not being shown towards Sugreeva or Angada or even Rama.

To this question, Jambavan replies

If that brave Hanumana is surviving, the whole army even if killed, is unhurt. On the other hand, if Hanumana has given up his life, we are all dead, even though living. If Hanumana, who is equal to the wind and the fire in prowess, survives; then there is a hope for all of us to survive.

Subsequently, Hanumana gets all the necessary herbs to resurrect the army. Today, this conversation is of great relevance to the bhakts. A few things to take away from the conversation:

Modi is no Hanumana to finish a herculean task in a jiffy. He needs time. Not denying he needs to be pressurized in order to get a few things done. So, criticism of Modi becomes inevitable, but that can happen without being cynical too. Supporters may have a list of priorities. Modi may deliver them, not necessarily in the same order and not necessarily in this tenure.

To say a vote for Modi is a vote wasted is to ask for your own downfall. Remember the story of a greedy and impatient owner of a hen that laid golden eggs? Haste makes waste. Acting on issues of importance in haste might land Hindus nowhere.

Modi can also be that ‘Nala’ who builds a setu (inroad) for the Vanaras (Pro-India Forces) to enter & disrupt Lanka (dens of the leftists).

Be it UP elections or 2019 elections, Hindus need Modi, just as much as Modi needs Hindus, at any cost. He is the only hope.

(This article first appeared at https://maanasamanthanam.wordpress.com/2017/02/27/dear-bhakts-modi-is-your-lifeline/ and is being reproduced with the consent of the author Nitin Shambhu, who tweets with the handle @boringTinTin)

Disclaimer: This article represents the opinions of the Author, and the Author is responsible for ensuring the factual veracity of the content. HinduPost will not be responsible for the accuracy, completeness, suitability, or validity of any information, contained herein.

Did you like this article? We’re a non-profit. Make a donation and help pay for our journalism.

The strange case of Sister Abhaya: An indictment of the criminal justice system

Farmers’ issues fail to strike a chord among people

Were Arnab Goswami’s chats deliberately leaked to malign and trap him?

‘Tractor rally’ on R-Day: SC says cops to decide on entry of farmers in Delhi

Born in a refugee camp, raised in exile